Gunning to progress the conversation regarding the applications and benefits of digital fashion was three-day London pop-up Hot Second (November 19-21). Echoing ideas explored in our report Retail’s Unreal Opportunities, Stylus spotlights its relevance. 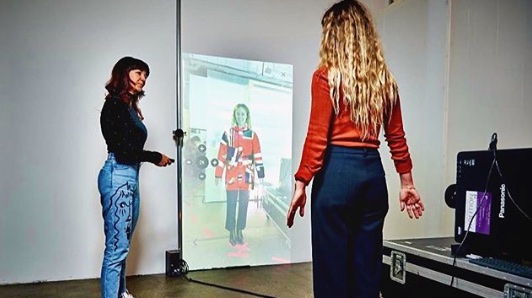 Visitors received an image of themselves wearing the garment – in print or by email (there was no capacity to buy items or transfer them into another online space, such as video games).

While the virtual overlays were cardboard cut-out style, rather than form-fitting, Nobbs revealed that visitors largely forgave their naivety for the chance to ‘access’ a garment that would be out of reach in real life – presenting a key opportunity for luxury brands. “I had people asking about things like being able to try on Princess Diana’s wedding dress,” she said. “People loved the idea of visiting an exhibition or show and getting to try on the looks.”

Commercialising the concept, the second edition of the store will pop up in Berlin in January 2020, in partnership with German blockchain specialists Lukso. This will add a monetary, tradeable value to the garments, making them clothing as well as a form of cryptocurrency.